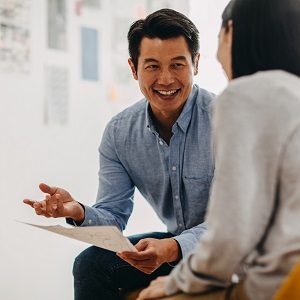 With a successful track record leading international transformational change programs, and years of experience coaching change leaders and teams, we accompany organizations and people in the realization of their flourishing aspirations and goals, resulting in a sustainable increase in well-being and performance.

The International Coaching Federation (ICF) defines coaching as « partnering with clients in a thought-provoking and creative process that inspires them to maximize their personal and professional potential. »

Looking at the origin of the coaching term, Berg and Szabó’s proposed the following coaching definition: « Comfortably bringing important people from where they are to where they want to be. »

Following the educator and sports coach W. Timothy Gallwey, and pioneering business coaching, Sir John Whitmore believed performance improvement in organizations comes from focusing on people’s potential, increasing learning and enjoyment opportunities, and finding a sense of purpose in work. In his own words: « Coaching is unlocking people’s potential to maximize their own performance. »

Coaching for Self-leadership and Flourishing

We believe performance and productivity will increase with people’s self-leadership and flourishing. Recent evidence-based studies show that the combination of the development of awareness and focus, together with positive interventions does not only decrease languishing and increase flourishing but also work performance.

Coaching for Aliveness and Joy

Moving away from a limited utilitarian, rational, and mechanical paradigm, and in line with the humanistic psychology approach, we like to see performance as a coaching by-product.

Doug Silsbee offered a clear distinction between performance coaching and developmental coaching. Performance coaching aims to develop observable competency in fulfilling the client’s goals. In addition to performance, developmental coaching helps develop the self-generative capacity of the client beyond measurable specific competencies, creating the conditions for an experience of greater aliveness, fulfillment, and joy.

Widening the scope of coaching, Silsbee proposed the following coaching definition: « Coaching is that part of a relationship in which one person is primarily dedicated to serving the long-term development of competence, self-generation, and aliveness in the other. »

Within this very wide coaching perspective, appreciative and solution focus processes and language, as well as the vision contained in the client’s preferred future, have an important role in providing direction, mobilizing the client’s energy and resources, and making the coaching relationship a living achievement experience.

The radical contribution of solution focus coaching has been to change the process from moving away from a problem to moving towards the solution, the coach following the client in defining what the solution is, in the context of a relationship that appreciates competence and autonomy.

In the coaching interactions, not only the minds, conceived as both analytical and imaginative, but also the hearts and bodies of both coach and client are fully at play.

The role of the heart in psychotherapy, and consequently in coaching, has been clearly stated by Carl R. Rogers, who invited psychotherapists to have an unconditionally positive and not directive regard for the client’s basic worth – or person-centered approach. Listening with « a spirit which genuinely respects the potential worth of the individual, which considers his sights and trusts his capacity for self-direction. »

In generative and presence-based coaching, all different levels of consciousness are mindfully present, allowing for transformational change and flourishing.

Following Milton H. Erickson, and very much in line with the ancient Yogachara Buddhist philosophy and psychology, Stephen Gilligan proposes a generative coaching practice where any creative action requires the skillful conscious mind to realize the potential of the unconscious mind. The conscious mind is needed to set and maintain intention, sense and evaluate multiple pathways of possibility, properly name and represent experience, and organize actions operationally.

The generative coach practices in a state of mindful presence maintaining both a self and open awareness, as well as a dual-level creative and practical flow: performer and meta-present, generative and strategic, self-congruent and actively self-endorsed.

We believe optimal generative aliveness and performance are tied to solution focus and flourishing, and we define and practice coaching as a transformational and flourishing integrative awareness intervention leading to a self-congruent and self-endorsed engaged life.

The International Coaching Federation (ICF) was formed in 1995 to give credibility to an emerging profession and give coaches a place to connect. Since then, ICF has become the world’s largest organization of professionally trained coaches, and the leading voice for the global coaching community.

Coaching is defined by ICF as partnering with clients in a thought-provoking and creative process that inspires them to maximize their personal and professional potential.

ICF sees coaching as an integral part of a thriving society and every ICF Member represents the highest quality of professional coaching. ICF exists to lead the global advancement of the coaching profession and empower the world through coaching.

The ICF ecosystem is committed to reliability, openness, acceptance and congruence, and considers all parts of the ICF Community mutually accountable to uphold the values of integrity, excellence, collaboration and respect.

Managing Director of Gallifa & Partner LLC, Jaume Gallifa holds a professional coaching certification from the ICF and is a member of the ICF Switzerland Charter Chapter.